Dr. Kinder is certified by the American Board of Urology.

Dr. John Beasley is a graduate of the Medical University of South Carolina. After earning his M.D. in 1989, he pursued his surgical residency at the University of Arkansas for Medical Sciences University from 1990-1991. He completed his urologic residency from 1991 to 1994 at the same institution. Dr. Beasley was certified by the American Board of Urology in 1996.

Dr. Beasley is a member of several medical societies, including the American Urological Association.

Dr. Chapman graduated from Middlebury College with honors in Chemistry in 1990. He graduated from Rush Medical College in 1995 where he was elected to the Alpha Omega Alpha Medical Honor Society and was president his senior year. He completed residencies in General Surgery and Urology in 2001 at the University of Virginia. He is certified by the American Board of Urology.

Dr. Chapman was then an Assistant Professor of Surgery (Urology) at the Brown University School of Medicine until 2003 when he joined the Marshfield Clinic in Wisconsin. In June 2007, Dr. Chapman completed a fellowship in Urologic Oncology, Robotic and Laparoscopic Surgery at the Roswell Park Cancer Institute in Buffalo, NY.

Dr. Chapman has extensive training in the diagnosis and treatment of urologic cancer as well as expertise in laparoscopic kidney surgery and robotic prostatectomy using the da Vinci Robot. 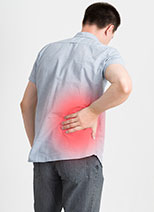